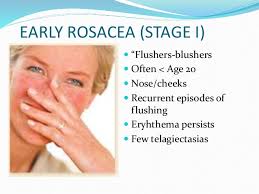 Rosacea is a chronic inflammatory skin condition that often occurs between the ages of 30 and 50. It is characterised by redness and flushing across the nose and cheeks but can also affect the neck, chest, eyes and ears. Rosacea is more prevalent in pale skinned people of European descent, and so is also known as the “Celtic Curse”. This condition occurs more frequently in women however men are more likely to experience severe manifestations such as deformities of the nose. Currently there are no completely effective therapeutic treatments however, the condition is manageable with diet and lifestyle and there are a number of topical treatments emerging that are proving to be beneficial.

If not managed, rosacea tends to get worse over time however it does go through periods of acute flare up and then lessening symptoms. The condition starts out as mild to moderate flushing and redness, often set off by exercise, changes in temperature and cleansing. It then progresses to semi-permanent erythema (redness) and dilation of blood vessels on the face. Red bumps and pustules as well as gritty eyes and burning sensations may also manifest.

Genetic and environmental factors are thought to contribute to the development of rosacea however there is no clear cut relationship. The current theory is that chronic damage to the blood vessels on the face leads to swelling and ongoing dilation which give the flushed appearance. Localised immune responses and inflammation then activate pustules. Rosacea sufferers may also develop over-grown sebaceous glands which contribute to cyst formation. Sun damage is almost certainly plays a contributing role.

While environmental factors are most likely continue the progression of rosacea, there are a number of things that will trigger an acute attack. Commonly these include:

A survey conducted by the National Rosacea Society indicated that skin care products that contain alcohol and synthetic fragrance as well as some essential oils such as eucalyptus and peppermint are more likely to aggravate rosacea. Other potential topical irritants include acne and wrinkle treatments such as microdermabrasion, benzoyl peroxide and chemical peels.

The key to the management of rosacea is to minimise exposure to anything that causes a flare up. A good way to establish which factors trigger a skin reaction is to keep a rosacea diary and note down any direct associations noticed. Avoiding triggers is an important way to help slow the onset of the condition but is unlikely to cause remission except in mild cases.

Other suggestions for avoiding flare ups include wearing sunscreen with a SPF of at least 15 will help to protect the skin from sun damage. Use sunscreens based on zinc oxide rather than chemical filters. A hat will also help to minimise sun exposure. Avoid temperature extremes such as going from a heated room out into the cold air or from air-conditioning into hot weather. Hot showers and overheating may also trigger a skin reaction. Also avoid any cosmetic or skin care products with alcohol or any that cause redness, stinging sensations or irritation.

Due to the enlarged sebaceous glands with rosacea there is a greater tendency for congestion. From a skin care perspective, use light or gel based moisturisers as heavier creams may have a comedogenic effect and clog pores. Many people are tempted with oily or congested skin to use strong foaming cleansers which often contain sodium lauryl sulphate (SLS). Rosacea is already associated with damage to the endothelium and so foaming agents containing SLS should generally be avoided as they may increase irritation and further reduce skin integrity. Cleansers that contain Aloe vera or liquid castile soap are more gentle options.

Application of liquid foundation may also contribute to skin reactions. Cosmetically, mineral based make up such as those containing zinc or titanium dioxide are ideal as they cover redness without congesting pores. However, it is important to avoid any mineral make up that contains talc as again this will promote congestion.

Key areas to target with topical treatment include reducing inflammatory and immune responses and increasing blood vessel integrity. One herbal ingredient that is gaining popularity as an effective topical treatment for rosacea is Centella asiatica or Gotu kola. Therapeutically, Centella has been used as a tonic and connective tissue strengthening herb. Recent studies have shown Centella asiatica may have a positive effect on the circulatory system and may improve blood flow throughout the body by strengthening the veins and capillaries. This effect in particular is good for those that suffer from broken surface capillaries on their face and also for rosacea sufferers. By improving the integrity of the facial capillaries Centella works to reduce the “flushing effect”. Other un-researched ingredients that have been used effectively with rosacea include comfrey to strengthen skin tissues, marine nutrients (kelp) to reduce inflammation and calendula for its healing qualities.

From a dietary perspective a high fat, high sugar (processed foods) diet will contribute to inflammation. Avoiding foods high in saturated and trans fats and simple sugars will help to reduce this effect which will also minimise localised skin inflammation. Foods that commonly contain trans or saturated fats include milk, milk products, margarine, shortening and other synthetically hydrogenated oils as well as fried foods. For rosacea specifically it is also advisable to avoid the foods that are likely to directly cause flushing such as alcohol, coffee, hot beverages and spicy foods. Avoiding simple sugars and highly processed foods also helps avoid the over-secretion of insulin, which occurs in response to raised blood sugar levels and is linked with systemic inflammation.

There is some research to suggest that low gastric acid levels in people with rosacea may contribute to the development or progression of the condition. Some rosacea patients have responded well to hydrochloric acid supplementation. Low stomach acid is also more likely to be associated with Helicobactor pylori (H. pylori). Supporting this theory is the finding that levels of H. pylori have been found to be higher in rosacea sufferers. A breath test can be used to test for H. pylori to establish if it is a contributing factor.

Essential fatty acids are important in the treatment and management of rosacea and sensitive skin. They work to reduce skin inflammation as well as improving skin moisture and appearance. Good sources of essential fatty acids include deep sea fish such as tuna, salmon and mackle as well as nuts and seeds. Flax oil and fish oil capsules are suitable alternatives if dietary intake is insufficient. Zinc is also important for skin repair and inflammation control. Good dietary sources of zinc include lean beef, whole grains, sunflower and pumpkin seeds.

This drink is fantastic for anyone with sensitive, inflamed skin. The lemon has an astringent effect which means it stimulates the liver to release bile into the digestive tract to be eliminated. The bile contains stored toxins so effectively you are dumping waste from your liver. The lecithin and fish or cod liver oil oil prime your digestive system for the day, particularly your fat digestion so again supporting the liver. And of course water is just plain good for you and helps flush out daily waste particularly via your kidneys.

In addition to all the good clearing out, fish or cod liver oil oil supports the moisture holding capacity of your skin cells and has a anti-inflammatory effect thereby supporting your skin’s health. Feedback from clients is that skin is generally less red and much more even toned since being on the Lemon Detox Drink.

The recipe is as follows:

Method: finely grate the rind of the lemon into the blender then squeeze in the lemon juice. Add the lecithin, flax oil and water. Blend for 1 minute until frothy. Pour and drink.

Are you struggling with chronic pain? Have you had a difficult to treat skin condition for a long time? Have you tried everything to alleviate your pain or fix your skin, but nothing seems to give any long lasting results? I work with people who are struggling with acne, psoriasis, eczema and ongoing skin issues or the chronic pain caused by neuropathy, IBS, auto-immune conditions or other sources of chronic pain. B.App.SC (Naturopathy), pain management, chronic skin conditions View more posts